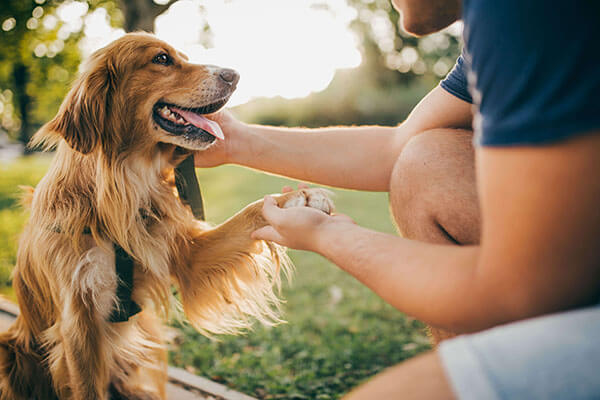 What Is Your Dog Trying To Tell You? Reading Signs And Body Language

There’s no denying that as a proud pet parent, you simply adore your pooch. You attend to their needs and sometimes even go to great lengths to keep them well and happy—just like you do with the other members of your family. But unlike your mother, sister or grandfather, your furry friend cannot tell you in words about the emotions they are experiencing.

However, their behaviour, body language and even the sounds they make speak volumes. Learning to interpret these signs will help you understand your dog better and even prepare you to handle flight-or-fight situations.

Curious about what your pooch’s actions mean? Let’s dig in…

When a dog is relaxed and peaceful, their eyes will appear normal. However, if a dog is frightened or surprised, the eyes will appear larger than normal. If a dog turns their head away but still holds their gaze towards someone to reveal the whites of their eyes, it means that they are agitated and could easily become hostile. This is referred to as “whale eye.” It rarely happens between a pet dog and their pet parents, but it can happen around strangers.

A dog that has their ears pricked up and standing at attention is alert and inquisitive. If the dog’s ears are resting back, it’s a sign that he’s trying to be friendly. A dog with flattened ears all the way back, on the other hand, is exhibiting fear and obedience. If a dog’s ears are up, erect, and inclined forward, it indicates that they might be potentially aggressive. If your dog has one ear up and the other down, it means that they are casually listening.

A closed yet relaxed mouth or even a slightly open mouth is characteristic of a dog that is content. If a dog is frightened or tense, their mouth will be shut tight. A dog demonstrates aggression by retracting their mouth to display their front teeth. 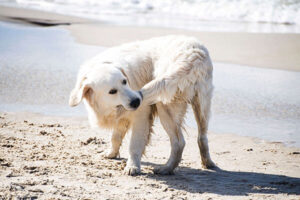 When a dog wags their tail to the right, it means they are happy and friendly. However, if they are upset or aggressive, they wag their tail to the left. A dog’s tail can also reflect a variety of other emotions. When a dog tucks their tail in between their legs, it means they are terrified. But a stiff, erect tail indicates hostility and serves as a warning to keep away. Occasionally, dogs also chase their tails, which could mean they are simply having fun or alleviating boredom. In the case of puppies, they are just discovering that their tail is a part of their body. However, excessive tail-chasing could be a symptom of compulsive behaviour. So if you notice that your dog is ignoring your commands to stop while chasing their tail, speak to your veterinarian.

It is a common canine greeting or sign of affection when a dog jumps on you and tries to lick your mouth.

Standing/sitting in between your feet 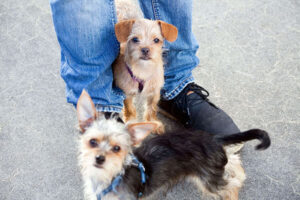 If your dog clings to you, and goes as far as standing or sitting in between your feet, it is most often a sign of separation anxiety and possessiveness.

A dog scratches the ground after relieving themselves to mark their territory.

Raising a paw or pawing at you 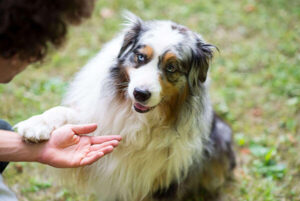 When a dog stands on their hind legs or holds a paw up, it means they are begging for something—usually food. If they place a paw on you, it could be an expression of love. If you notice signs of anxiety  while a dog does this, it means that they are looking for you to support and comfort them. However, if a dog is continuously pawing at you, it usually indicates that they are either asking for food, or to go outside.

When a dog rolls on their back to expose their belly, it means they are either being submissive, playful or asking for a belly rub. 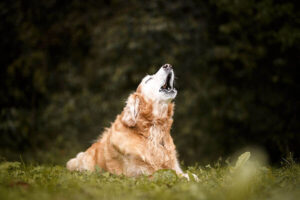 Most often, dogs groan or yawn when they are relaxing their body.

When dogs whine, it is usually because they want attention, they are excited or they are anxious.

A dog that growls with their teeth exposed is displaying aggression. However, if the teeth are not exposed, it indicates playfulness.

Generally, a single bark serves as an alert while multiple barks indicate that a dog is attempting to bring your attention to something. To comprehend your dog’s barking, look for secondary clues.

When a dog yips or lets out a short cry, it indicates that they are lonely or uncomfortable. Dogs usually yip when they are left alone or placed in their crate.

Howling is a group behaviour. Generally, dogs howl to communicate and bond with their pack. They also respond to howl-like sounds like sirens, humans howling and certain kinds of music.

Paying close attention to your dog’s facial expressions, body language, certain behaviours and even the sounds they make will help you gain a better understanding of their emotional state. This way, you can be more attuned to their needs, especially if they are showing signs of distress, anxiety or fright.